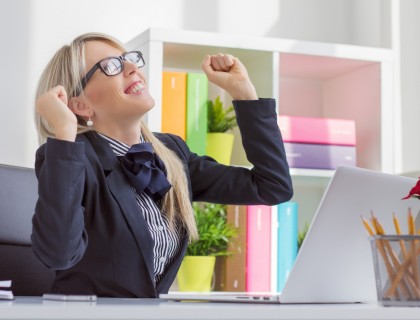 Have you seen her Ted Talk Your Body Language Shapes Who You Are? Over 30,000,000 people have viewed it! I’ve been watching it now for over two years and I use her research as a powerful 21st Century Leadership tool.

Cuddy, a social psychologist, has just published her first book, Presence: Bringing Your Boldest Self to Your Biggest Challenges, based on years of research and the amazing response to her Ted Talk. I read Presence over the holiday break.

Cuddy explains how we can actually use our bodies to change our thinking and create the inner power we need to overcome obstacles and reach our full potential. What’s really engaging about her research is that it was inspired by her personal experiences as a young woman and she tells a very compelling story about overcoming adversity. Cuddy and her team of researchers have discovered a ‘power pose’ that has a very positive effect in clinical trials. I’ve been using the ‘power pose’ for the past 2 years and I can tell you it really works.

The thing I like best about her book was her explanation that the ‘power pose’ provides you the personal power to manage challenges or to take on new challenges. It is not about having power over others. It’s power to, not power over!

I think this is one of the huge differences between 20th Century and 21st Century Leadership. For most of the 20th Century leaders often relied on autocratic and coercive leadership styles where they commanded, coerced and dominated others. They certainly had Most of the power All of the time. 21st Century Leadership, as I see it, is all about empowerment, cooperation, collaboration, innovation, opportunities and possibilities. It’s about unleashing talents and giving power to your teams to create, disrupt, problem solve, trial solutions and design innovations that will make a positive difference in the world. It’s exciting!

If you would like to know more powerful 21st Century Leadership strategies, skills and tools sign up to Leadership for the 21st Century a 2-day workshop in Melbourne on 25 & 26 February or Singapore on March 11 & 12.

I’m off to do my daily power pose!